Turns out I’m 47 years old and I don’t know how to breathe.

“In through your nose, deep into your diaphragm, and then out through your mouth. "I started accupuncture three weeks ago and Dr. Oh was coaching me to breathe through each needle poke. I’m good with needles, but apparently - not with breathing correctly. “Have you seen the movie The Karate Kid? Dr. Oh asks. Of course, I replied. “What do you think Wax on, wax off is? It’s your breath. Innnnnnnnnn and ouuuuuuuttttttt he said, gesturing the rise and fall with his hands. I don’t know what it was- the nurturing from this quirky sweet man, or the nostalgia of a 90’s movie from my youth- but my eyes filled with tears.

Dory might have needed to swim- but friends- We need to Just keep Breathing.

Life gets hard. And easier and harder and easier. I never fully recognize a hard until an easy part makes me realize - I think I can let go for a minute. Having shoulder surgery strangely a month ago, filled me with gratitude for all the parts that still work. I was kicking ass and healing through my own hard work and the hands of my awesome Physical Therapists. What a gift it is to heal- because sometimes when you are in the middle of pain, you are afraid you will always feel this way. Some people don't get to heal.

But then two weeks ago, an unfamiliar deep ache filled both of my shoulders. A feeling that felt like my knee arthritis. And a headache Advil wouldn’t touch and one that wouldn’t go away. There was one Saturday right before it rained that I mostly just stayed in bed. I'm tired of pain. Tired tired tired. I motored through because that’s what we do- right? No sick days.

Grey wouldn’t let me help him brush his teeth the other night. And trying to floss his teeth was a nightmare for him and me. After Parker’s 3 1/2 hour dental surgery last week while under anesthesia at the hospital, I’ve realized the half ass brushing won’t cut it long term- so it’s time for some short term pain of desensitization. Grey will have this done in June. 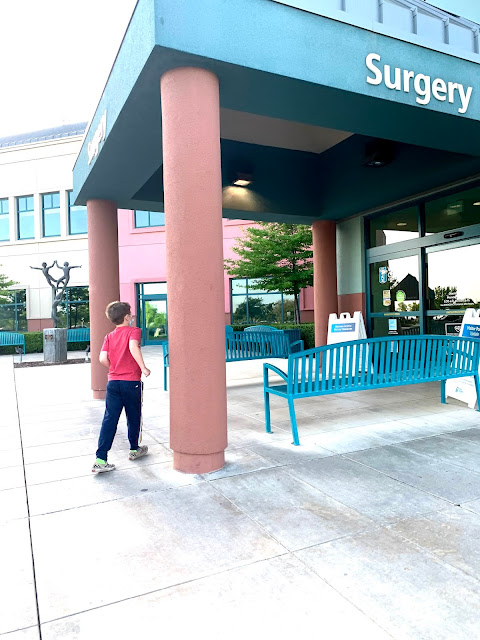 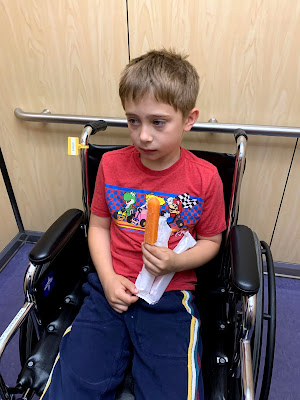 Grey held his mouth shut. Or screamed in my face at the top of his lungs. There was toothpaste all over. He's almost as tall as I am, and it’s so different from toddler melt downs. He started to elbow me in the arms, near my shoulders and I almost came undone. STOP! STOP! STOP! I yelled louder than appropriate for a kid having his own sensory nightmare right then. So I finished flossing and just held all that anger and guilt in. Realizing- this all adds up. It stays in our bones until we find a way to get it out.

Yesterday I went to my Orthopaedic office to have my shoulders looked at. I had already diagnosed myself with Glenohumeral arthritis and had been researching the grueling surgery of shoulder replacement. A surgery most travel for, because Fresno isn't the best place for it. How will I take care of the boys after a shoulder replacement surgery? How will I get TWO done?! How will I drive them to therapy as Michael goes back to work? As soon as the Doc walked in and asked, "What's going on with your shoulders?" I let him know my diagnosis. He looked confused. Glenohumeral arthritis? I don't think so - he said with sincerity as he scoured the computer through my chart- your surgery report on your left shoulder showed a little inflammation on your glenohumoral joint- but not arthritis. Your joint space looks great. He pulls up my right shoulder xray- I see a small bone spur- but nothing I find concerning.

I'LL TAKE IT! I told him relived. The vision of my double full shoulder replacement surgery turning into dust. However, there is pain there, so he said we could do another set of ultra sound guided steroid/cortisone injections into my shoulder- which should clear up whatever it was that inflamed. He wasn't concerned because he is awesome and super chill and can read xrays. I like to know the names of what I have/what is happening and I need a short and long term plan. I'm learning to be more like him. Y'all the shoulder is SO COMPLICATED. I can't believe everything it contains and everything it does! 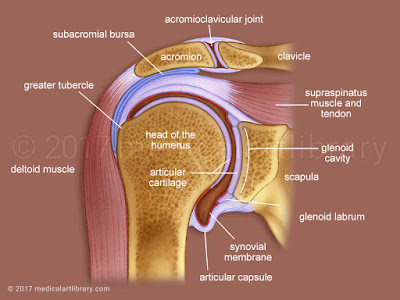 Here are the movements it's capable of:

God really outdid himself with this one. I'm sorry I forgot to be in awe of it until it broke, God. It is one of the most mobile joints in the body, and contains muscles (like the rotator cuff), tendons, ligaments, three main bones (Scapula, humerus, and the clavicle), and lots more games and prizes. So the older you get, the more its relationship status becomes, "it's complicated" when you have an issue.

I asked if he would also do a trigger point injection for a knot I've had in my upper trap muscle for years. He palpated my trap along the muscle fibers and found it instantly. "Could that be causing my headache?" I ask him. "Absolutely" he responds and puts the marking pen back into his mouth, concentrating on doing the setting up the ultrasound. As soon as he put the needle in the knot, I felt immense pressure on the muscle. If it had been accompanied by music, it would have been a Double Bassoon playing foreboding music as it released. Slowly the pressure escaped as the jelly like fluid exited the syringe and bathed the muscle. The pain of the injection felt good- releasing the pain of the knot. My amazing doc then did both shoulders and I was done. It takes a couple of days for the injections to work completely, so I left the office hopeful.

As soon as I started to exit the building, I felt a little dizzy, and without warning- I started sobbing. Not a silent tear trickling down my face, but face crumpled up, sniffling sobs in between gulps of air. (Thank God for masks). There was no- "I'm sad, I feel like crying" warning. Just tears. I felt it all trickling out- the accumulation of moments held onto and never released. They turn into actual poison in our bodies. Death and sadness and loss and fear and anger all trickled out. Blood started to flow into the area that hadn't felt it in so long, and I cried.

Such a reminder, that whatever it is- we must, with intention GET IT OUT. It is in our mind and in our body, and there is stays until we get it out. Mine hit a threshold, where writing and praying and exercise and good music could no longer do its job. It needed medical attention. What helps you get it out? Are you making time to do it? I sure hope so, you deserve it.

The first step to releasing pain from within, is just the self awareness that it's there and a want to release it. The goal is to move the energy of emotion through and out the body so we can let it go. We can do that.

That, and just keep breathing.

Parker and I have THIS SONG on repeat. Must listen.