Grease, National Lampoon's Vacation, Father of the Bride, Harry Potter, The Hunger Games, Lethal Weapon, Shrek, Three Men and a Baby, Thor, Star Wars, and many many more movies all have sequels. Sometimes even part 3's and more. I won't be shocked if there is a Toy Story 68 by the time my kids are grown.

We just watched Top Gun Maverick, and it was a downright magical experience. Maybe it was because I haven't been to the movie in years (thanks C word). Maybe it's because it was my first experience in a 2DX theater.

ScreenX is a multi-projection theater which surrounds the audience in 270 degrees of visual media for an immersive movie viewing experience. It was explosive, the kind where you feel it in your chest while getting tears in your eyes. The boys loved it.

Lately I've been thinking a lot about where I am in life now. What about the middle aged? Do I get a part two? Part one was all planned out for me by the world before I was even born. Elementary School, High School, College for some, "real world" or Trade School. I got my Bachelors Degree in Communications Manangement at Southwest Missouri State- now Missouri State University. Isn't that the most made up sounding area of expertise ever? I can assure you, I can empty the dishwasher and fold laundry so much better because of it.

Life Plan: Have an ambitious career! Get married! Buy a house! Get a dog!  Have kids. Congratulations! You are the starring role of your one life! Bravo!

I didn’t realize how powerful of collateral youth was, until mine was spent. Don’t get me wrong- I spent it wisely- simply by living. Being passionate about school and career. Moving from Missouri to California. Kissing a lot of frogs. Living on my own. Trying new things. Screwing up and trying again.

In the prime of my youth, I didn’t think- Oh I’m 28, I’m lucky and healthy and my knees aren't shot so I can run! I thought- I’m 28 and not married. I still have ikea furniture. Aren’t I supposed to be established by now? Why can't time fast forward?

I don’t think we can truly Master a level until we can examine it in retrospect from the next one. I wish we could watch it like This is Your Life- For the youngens, this was a TV show in the 1950's that surprised guests and then took them through a retrospective of their lives in front of an audience, including appearances by colleagues, friends, and family.

What if we got to experience our previous decade that way? I think we would have so much more empathy and awe for ourselves. Oh yes, that was smart, Chrissy. Boy did you screw up there- but you knew it and your learned from it. And that comeback sure was incredible- so resourceful!

Actually- we don't spend a whole lot of time looking back at the remarkable things we did or went through. We don't honor the struggles and celebrate the triumps. I would say that's because life is just moving too fast. But boy do we spend a ton of time focusing on what went wrong. I wonder why that is?

In an effort to look younger, I got some Botox and filler in my lips over the Winter. I've done it a handful of times before, usually after looking at myself in a picture thinking- when the heck did that happen? A few days after the injection, I woke up with the right side of my face burning and itching like crazy. I had Shingles (thank goodness just the nerve pain, not the rash).

Shingles! SHINGLES. WTF, an old people disease that I got from trying to look less old. This was my second time getting Shingles, and I realized the first time was after Botox too. So I guess that's out of the question, apparently I'm supposed to grow old a little more "gracefully". Hmmmpf.

I think we should grow old however the hell we want. You want crazy plastic surgery and every injection known to man? Why not. It's your face, and just because it isn't for me doesn't mean it's not for anyone.

I'm still figuring out how to grow old,  I get it. 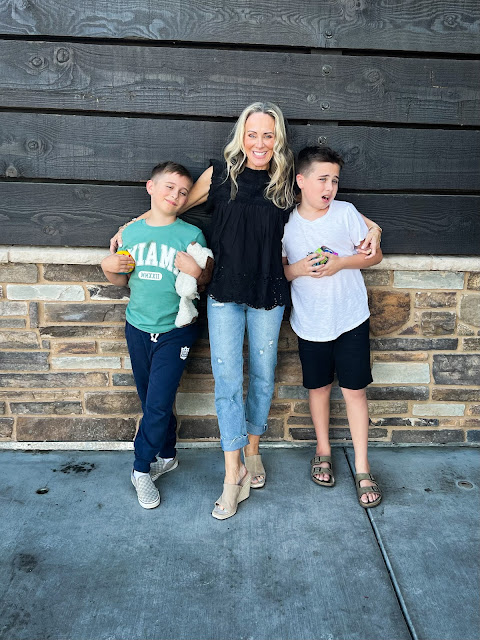 So here I sit, with my crows feet that honest to goodness go from my eyes to my mouth. Big bird feet I call 'em, examining my Part Two and trying to figure out what it will hold. I still get to be the star of it. Mine will be a little different from most others, I don't see my children leaving the nest and bringing home Grandchildren to visit. I'm learning that whatever it looks like, it will be ok. Most amazing movies don't follow the same old path everyone takes anyway. That would be an awfully boring movie. Amazing stories are always the ones that look completely different from Status Quo.

I know Part Two is less about ambition and attaining. It will be more about: appreciating your present, creating things, engaging in things that feed my soul, surrounding myself with likeminded people, connecting to things that don’t plug in, stretching to the point of uncomfortable when I am in the headspace to do so, reading, learning, leaving everywhere better than I found it, saying get instead of have (I get to take the boys to therapy. I get to go to the doctor.) and going easy on the girl in the mirror- she’s amazing. So are you.

Keep that in mind if you feel like you've fallen off a traditional path. Your Part Two is waiting.

If this post had a theme song it would be THIS:

Night Changes by One Direction:

And I've been thinkin' about it lately

Does it ever drive you crazy

Just how fast the night changes?

Everything that you've ever dreamed of

Disappearing when you wake up

But there's nothing to be afraid of

Even when the night changes

It will never change me and you

PS- I made the font bigger on this post in case your eyes are going to shit like mine. You are welcome.)