much more than one thousand words

I squint my eyes and strain to think of the exact moment it happened. The moment the light bulb went off in Parker's head and he realized what the small black machine I carry can do. For all I know, it may have been years ago, waiting dormant until he wanted to turn thought into action. Last weekend in Hermosa Beach, was the first time Parker ever acknowledged my camera out loud. Not only did he acknowledge it- he wanted to use it.

I want cam-rah, he determinedly exclaimed, with a white knuckled grip that wasn't taking no for an answer.

I used to do photography professionally, and when I started, I purchased the mack daddy of cameras at the time; a Canon Mark ii. I don't know what that means in terms of bells and dohickeys, but I know the lens sees life almost as beautiful as it actually is. I love this camera, and its ability to remind me of the beauty my life already contains. I no longer do portraits professionally, I prefer to funnel that need to create into writing and taking pictures of our life to share with you here. My favorite pictures are no longer perfectly arranged - smile and look here, portraits. They are of a perfectly mundane Monday. A bubble bath.  A trip to get ice cream. Perfect square little boy feet. The everyday goodness that we sometimes forget to notice. My camera reminds me to notice, and wakes me up to the stuff that means the most to me.

He can NOT use my camera, was my first thought after his request. He will get it sandy and break it and I'm not shelling out thousands of dollars to replace it. Nope. Big fat nope. But he kept his hands on it stubbornly- and in the tug of war I realized- why not? It's already sandy, and so what if he drops it? It will just get sandier. At first I helped. I made sure the strap was around his neck, should he decide he suddenly didn't want to hold it anymore. With my finger over his, I showed him how to click the shutter.

And like me, he was hooked. Each click emits a vibration satisfying a need you don't know you have until you are hooked. It's the same feeling you get when you are vaccuuming and can hear stuff coming up. (Clearly I can't be the only one who loves that sound?)

Over the past week, Parker has taken hundreds of pictures. I've tried to give him my old Canon Rebel, only to have him exclaim- "I need big camera." He's already a camera snob. Good thing he doesn't know Canon now has a Mark D IV.

Photography is all about lighting and perspective. And Parker's point of view is unique and beautiful. There are no great secrets when it comes to photography, other than you have to be willing to take a ton of bad pictures in order to get ones that speak to the soul. And Parker is a willing participant. I've deleted a million hilarious and awful photos- (he loves to take pictures of the television screen). But there are some that he has taken that make me pause and feel. That's all I want from my own pictures- to make people pause and feel.

Here are some of my favorites... "City" he exclaimed after taking this one.

"I want camera", he tells me at 6:30am, our first morning home after the beach. 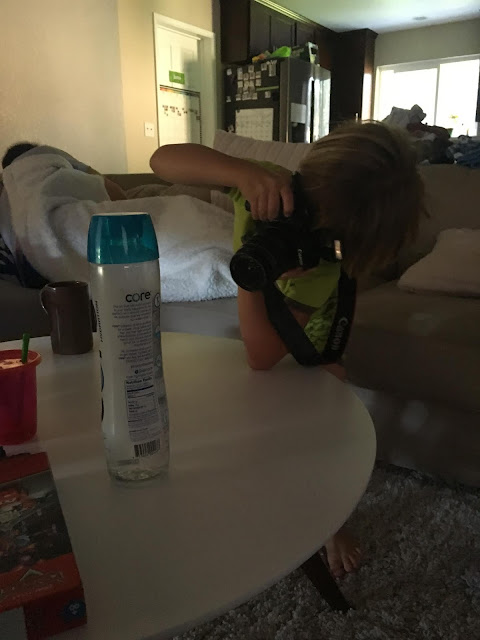 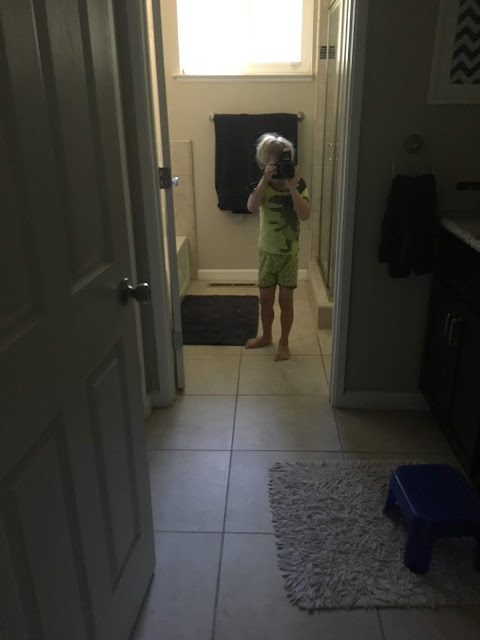 And then he roamed the house looking for his next subjects. I took this one of my beautiful boy. We were in the front yard, and he had just finished taking pictures of the lemon tree nearby. The lighting was perfect and my perspective was clear after watching Parker come alive by the same thing that makes me come alive.

Each one of Parker's pictures speak more than a thousand words. They say everything. They say- I am capable. I am creative. Focus on my strengths. I will always amaze you with what I can do.

They show me that he too finds beauty in the small details too. I've realized the people happiest in life do. If you want to create more happiness in your life- don't be afraid to be bad at something and pay attention to the details.

We all deserve to find the things that make us lose track of time and come alive. What does that for you?
at 4:38 PM